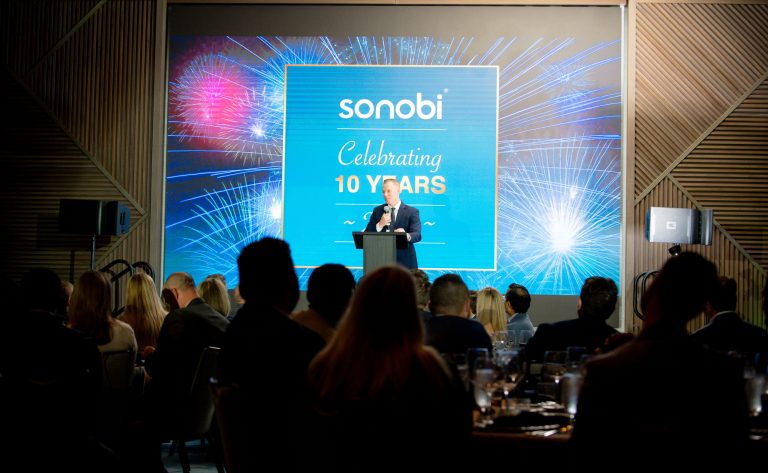 On November 19, 2021, Sonobi’s employees along with friends and family, came together to celebrate the numerous achievements from over the past 10 years. Sonobi hosted a black-tie event at the gorgeous Walt Disney World Swan Reserve, putting on a red carpet affair that would rival most Hollywood award shows. During the cocktail hour, everyone enjoyed the breathtaking views from the 15th floor, as live music spilled out onto the balconies from the bandstand within. Everyone reminisced and laughed as nearby Disney fireworks lit up the night sky with dazzling displays of color.

The evening began with a cocktail hour as guests arrived from nearby as well as from across the country. Guests headed into the banquet hall to be met with an 4-course meal featuring lobster and prime rib. Sonobi’s MC for the evening, Christian DeLeon, started the program by welcoming all the guests and shortly after, played an often humorous documentary-style video showcasing a visual timeline of Sonobi’s early days to where the company is today.

The documentary started off by taking everyone back to the original office in Deland, Florida, where in 2012, Sonobi only had two employees. CEO Michael Connolly joined forces with COO Justin Kennedy, who met years before in Army Flight school. The determined pair decided to take a chance on starting an advertising and technology company that would soon take the world by storm. As the audience laughed and applauded, the documentary painted a clear picture of how Sonobi has grown and evolved over the years.

Leading the Way in Audience-First Innovations

Over the last 10 years, Sonobi has a track record of being a primary innovator in the adtech industry and has a heritage of driving change. Some notable examples are:

Get to know our Technology

The 10 Year Celebration wasn’t the only thing Sonobi raised their glasses to that night. In 2020, when COVID- 19 hit the world, Sonobi didn’t miss a beat. During that time Sonobi was acquired by CoHere, who saw Sonobi as a company that would lead the way into the next generation of Adtech, and whole-heartedly supported Sonobi’s vision.

After the acquisition, Sonobi’s leadership searched for other companies that could strengthen and enhance their technology. The company they found to do just that was, Amply Media in Kansas City, Missouri.

During the celebration event, we were able to welcome our new Amply Media team members and begin making memories. The event continued with awards, dinner, and to close out the night, we had the band New Soul Brigade, get everyone on their feet and on the dance floor.

To say the night was just a regular anniversary event would be a serious understatement. The Sonobi 10 Year Celebration was a night to remember! We know that without each and every employee throughout the last 10 years Sonobi would not be what it is today.

The Benefits of Push Notifications for Publishers

Taking the Digital World by Storm